The Hotel Riviera dei Fiori is an excellent starting point for this route:

The hills overlooking the sea of Lingueglietta and Cipressa

Development: S. Lorenzo – Lingueglietta – M. della Costa – Cipressa – Torre dei Marmi – S. Lorenzo
Difference in height: 400 m up and down
Difficulty: T/E
Hours of walking: approx 4
Periods advised: from October to May
Access: by car, exit at the motorway exit A10 of Imperia Ovest, and continue to S. Lorenzo. By train, get off at Imperia P. Maurizio station (Genoa - Ventimiglia line) and continue with the RT bus to S. Lorenzo.

Halfway between a hiking tour and a sightseeing tour, this loop route allows you to get to know some little known western Ligurian locations, far from the hubbub of the coast, perched on some hills overlooking the sea, with well preserved medieval villages rich in history

It starts from S. Lorenzo, a town that is rapidly expanding thanks to the expansion of the tourist port and the opening of a cycle path that follows the route of the old Genoa - Ventimiglia railway line. Then continue to Lingueglietta and Cipressa, two beautiful little villages perched in the green of the olive trees that surround the two inhabited areas.

After descending to the Via Aurelia we cross a stretch of the new sea promenade to S. Lorenzo.

At S. Lorenzo (s.l.d.m.) we take the road that joins the homonymous torrent on the west bank.

Avoid a pedestrian bridge and a road bridge, after a few hundred metres you take the next crossing (Via Molini). From here we go up the hill above halfway between the two tributaries of the Rio S. Lorenzo

Just passed under the highway viaduct we are facing a crossroads: take the paved road that proceeds flat on the left (Region Crose).

Gradually you gain altitude with short bends under the pine trees. Following the main route we find ourselves on a ridge area where isolated houses, abandoned fields and some vines appear.

Arrived just below Lingueglietta we find another crossroads: we still follow the road to the left marked with the inscription MTB, as it is a traditional cycle way. We descend a little, but just after the Rio Fossarelli the road starts to rise again

After a couple of bends we arrive on the road that comes from Imperia, which we will cover for a few hundred metres, until you reach the village of Lingueglietta (327 m - 1h 30 'walk from S. Lorenzo).

After a visit to the historic centre with the beautiful fortified church of St. Peter, proceed on the upper street of the village overlooking the valley below and towards Mount Faudo. We take Via Isola that passes through the highest houses of the town, until you reach the junction with the cemetery. Here we follow the indication for Cipressa, with a yellow trail that guides us in the next stretch.

When you reach a lamp post with a control unit, follow the trail sign along a paved road to the right. Passing in the middle of the fields between two rows of dry stone walls you arrive in a short time in a pine forest. When you reach the ridge, the view opens towards the coast between Imperia and S. Remo. Proceed now on the dirt road downhill to a fork: here we take a wide dirt road that proceeds towards the sea, while at the next junction turn left towards Strada S. Antonio. This passes between the houses of M. della Costa (400 m). Following the only possible direction and ignoring a branch on the right you will arrive near the last house: here we take a dirt road that continues to the left in a pine forest. In the maze of paths we choose the one on the right that goes down in the direction of an aqueduct. We follow it and descend to an altitude until we reach the church of S. Antonio. This beautiful religious artifact is located in a privileged position on the coast, but it is almost always closed (photo).

From the square in front of the church we take a dirt road that, detaching on the right, descends towards Cipressa (243 m - 2h 45 'walk). Near the village the track becomes asphalted and reaches a fork. Proceed to the right on the highest street of the municipality that soon dives into the alleys of the medieval village.

Once in the centre we visit the castle, the church and the Gallinaria Tower.

From the centre of the village we take the road for Sanremo that we will cover for a while, until we cross the A10 motorway.

After a hairpin bend we continue along a stretch of the road until you find a small road on the left that descends towards the sea (Region Marmo).

The road descends towards a group of greenhouses and ends shortly below the latter. At this point a path branches off that passes between the abandoned areas and in a short time leads us onto the Via Aurelia in Piani di Cipressa, near the Torre dei Marmi (20 m). After crossing the road we find ourselves in front of the descent towards the cycle path - walk from S. Lorenzo - S.Stefano al Mare

To return in the direction of S. Lorenzo we follow the walk in an easterly direction, along the S. Lorenzo tunnel, which is 1,500 metres long (20 'walk) that opens up before the village itself. Another 15 - 20 minutes and we arrive in the centre of S. Lorenzo, where our ring closes.

A piece of advice: the entire route excluding the stretch of the road of Region Marmi (slipping off in the direction of the sea on the same road from Cipressa to Sanremo), is viable on MTB. It is therefore possible to combine this hill with the marine track of the cycle path. 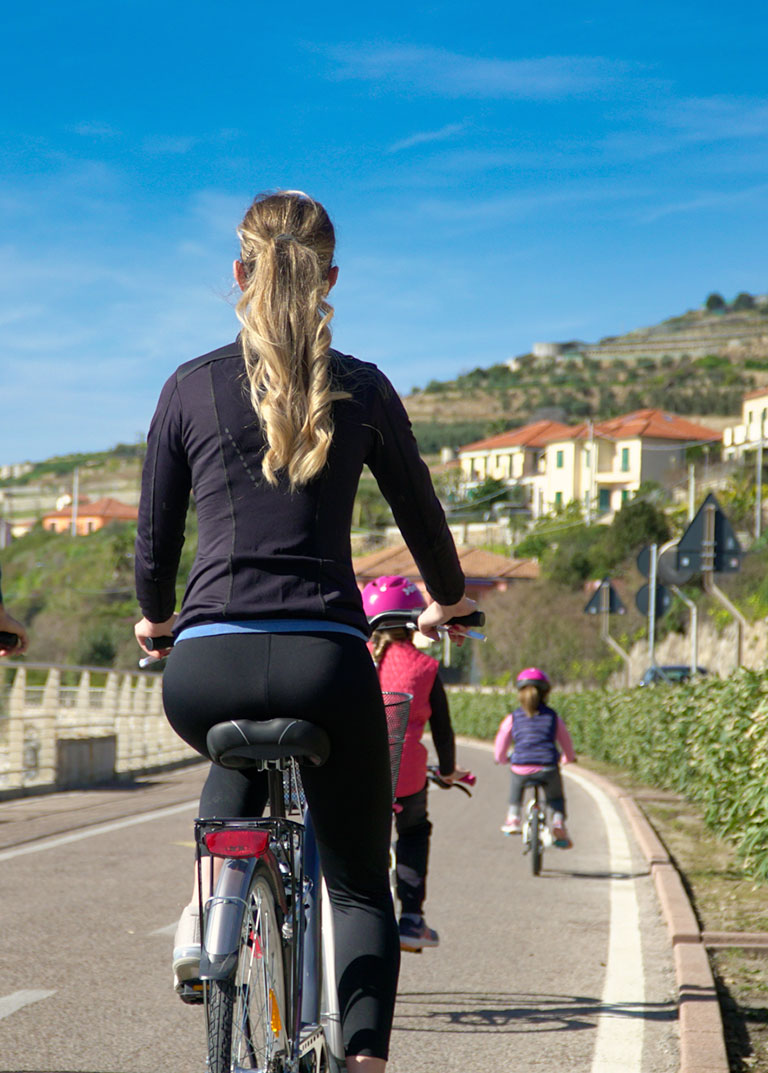