After the Rio dell'Inferno, where the Genoa - Ventimiglia railway line crosses the Aurelia to pass inland, we enter the town of S. Lorenzo al Mare. It is a quiet village, made essentially of second homes, which is experiencing a revival phase in recent years. The ancient nucleus has been restructured, while in the eastern part of the village we find the Marina of S. Lorenzo, a tourist port that widens the offer of berths in the past limited to a few fishing boats

The other great challenge of S. Lorenzo is the new cycle path - a sea promenade that is developing along the route of the old single-track railway station, abandoned a few years ago following the doubling of the Genoa-Ventimiglia line. This work extends for over 24 km between Ospedaletti and S. Lorenzo.

With the upward movement of the railway in the S. Lorenzo - Albenga stretch and in the Albenga - Finale section, the areas made free can be recovered in the same way, thus constituting a 70 km cycle path. Thus some staging posts could be placed aliong the way. A similar work is present in Santa Monica in California, and has contributed greatly to revitalize the area. In a period of suffering for the tourist market this work is big news. The village of S. Lorenzo al Mare begins with a couple of pebble beaches near the new tourist port. After the latter, we find the beach below the village, slightly enlarged thanks to the filling works undertaken to build the marina. It is a beach of fine sand mixed with pebbles, with free and private facilities (photo 1). Some piers protect it from the southern winds, as the town rises on a very protruding point of the coast.

Following are the old tourist port and a couple of small beaches, before the mouth of the Rio S. Lorenzo. A wooden walkway allows us to stay along the promenade and to pass near the ancient part of the village. Here we find the widest beach of the tourist resort, with private or free equipped bathing establishments (photo 2). The beach has fine sand and with shallow water in the first few metres. We leave the village and continue on the promenade, now integrated with the cycle path. From here begins a long stretch of coastline characterized by many rocks and boulders, and small pebble beaches. The environment is wild and fascinating, the waters are very clean and the few recesses gather those swimmers who want to stay out of the crowds of crowded beaches. Some attention should be paid to slippery boulders. We can either proceed along the walk or between the rocks.

The walk of S. Lorenzo ends near the homonymous tunnel of the old railway station, now equipped for the transit of bikes and pedestrians. The tunnel is 1500 metres long, walkable in 20 minutes and in no time with the bicycle, equipped with a lighting system and signs indicating the distances between the two exits. As an alternative to the tunnel there is a walk on an unasphalted road, which recalls the coastal paths of the Cinque Terre. This itinerary starts from the eastern entrance of the tunnel and rejoins halfway on the Aurelia. From here it descends towards the west entrance of the tunnel. It 'a very fascinating itinerary that passes over the beaches of pebbles that alternate with some stretches of rocks and boulders (photo 3).

Once outside the tunnel, we find ourselves in the municipality of Cipressa, in Piani, at the base of the village that rises in the hills, at an altitude of 250 metres. Anyone wishing to visit the village can use a flight of steps leading to the Aurelia, continue as asphalted for a short distance and then proceed on the path. After passing some greenhouses, it rejoins the rolling road to Cipressa, which we will travel until arriving at the village.

At the exit of the tunnel we notice a beautiful pebble beach, dominated by some rocks and a whitish construction, the Torre dei Marmi. Together with the towers in this stretch of coast (from that of Prarola to Porto Maurizio, up to the Saracen towers of Riva L. and S. Stefano al Mare), this artifact was part of a sixteenth century coastal defense system that signaled the presence of of Saracen ships, ready to plunder coastal populations. If a pirate boat was sighted from a tower, a bonfire signal was immediately lit, which was repeated with a domino effect on the other towers. In this way the coastal populations took refuge inside, preparing for the worst.

To access this beach, barely visible from the promenade, it is necessary to bypass a private property, climbing on the Aurelia, covering the latter for about fifty metres in an easterly direction, and finally descending along a flight of steps that leads directly to the coast. This access also allows you to reach the neighbouring cliff up to a certain point, In addition in the direction of Imperia, the cliff belongs to a campsite, and is not accessibile being a private property.

Returning to the promenade, this continues almost straight ahead in view of the tourist port of Aregai. This stretch has no beaches, with a long cliff dominating the coastal landscape (photo 4). Only in the vicinity of the marina, just below the village of Aregai, there is a short strip of free beach, made up of pebbles and pebbles (photo 5). Circling a Saracen tower, begins the long stretch occupied by the Marina of Aregai, a newly built tourist port, with 1000 berths, commercial activities, sports facilities and holiday apartments. A structure of the first order in Liguria, also equipped with two docks and everything necessary for lovers of yachting.

Fortunately, the marina occupies a fairly anonymous stretch of coast, with few beaches and several cliffs. The same features also characterize the stretch of coast up to S. Stefano al Mare, where there are several sandy shores protected by piers which serve as breakwaters, artificial reefs and brushes. In some places the beach is raised above the sea level, protected by concrete walls and boulders (photo 6).

From a fishing village with a moderate agricultural vocation, S. Stefano al Mare over the decades has boosted its tourist vocation, embellishing its walk, renovating the facades of houses, but above all trying to equip itself with all those structures to ensure a quiet beach holiday. The cycle path and the nearby marina have done the rest,and now the village is in great demand by lovers of quiet places, far from the hubbub of famous holiday places such as San Remo

The village is still equipped with the old port, where the fishing boats are still stationed.

Almost contiguous to S. Stefano is Riva Ligure (photo 7), which is now joined to the other village. This place is perhaps the wildest place on the Riviera di Ponente, with few seaside facilities, a village with few artifacts and an essentially agricultural economy. Some floricultural plants even reach the beach to the east of the mouth of the Torrente Argentina, giving the impression of a neglected place without interest. The locality is also penalized by the fact that the sea often gives large quantities of algae that cover the entire beach. This phenomenon is explained by the fact that this stretch of coast is enriched with nutrients coming from the nearby stream.

The charm of this village lies in the fact that it has not sought tourism development at all costs, but simply wants to stay old, like one of those coastal villages of some time ago. The only new structure for Riva L. is the cycle path that follows the old disused railway track.

After a stretch marked by small pebbly beaches, almost all free, we find the area of the mouth of the Torrent Argentina, dominated by a couple of embankments and short pebble beaches. Beyond the watercourse begins the village of Arma di Taggia which presents aspects decidedly different from those of Riva Ligure. 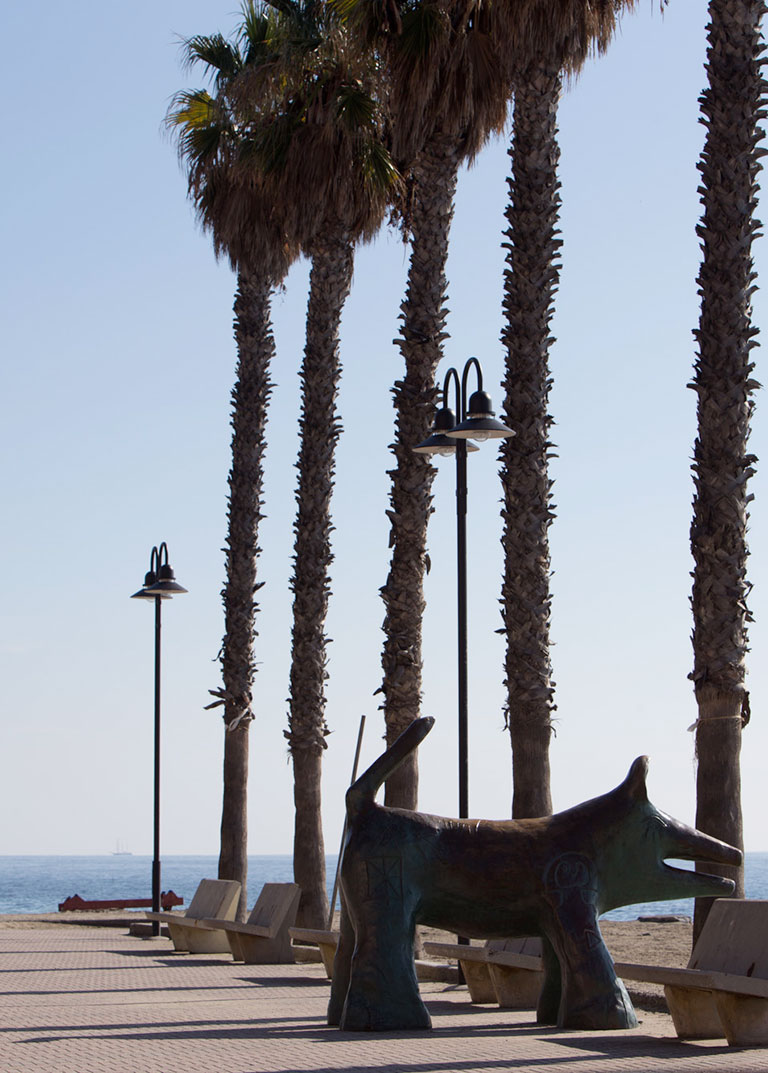