History of sailing in Liguria

The history of sailing in Liguria and in Italy began about 150 years ago. Liguria was immediately a centre of strong and well-established diffusion of this activity thanks to the strong maritime culture and the presence of a substantial merchant fleet.

The forerunner of the pleasure boat was Cap. Enrico A. D'Albertis born in 1846 in Voltri. D'Albertis after a long experience in the navy and merchant marine had the "Violante" built by the Oneto yard of Sampierdarena. With this Cutter, a little more than 12 metres long, he embarked on cruises in the Tuscan archipelago and other places in the Mediterranean. D'Albertis was a great lover of geography and ethnography his explorations and collections of finds are very important and still visible today in the museum dedicated to him in the castle of Montegalletto. Later in 1892, on the occasion of the four hundredth anniversary of the discovery of America D'Albertis undertook a new journet with the "Corsaro" a new cruise Yacht built by Briasco in Sestri Ponente.

The Oneto shipyard and the Briasco shipyard were among the first on the Genoese coast to build pleasure boats and cruises. Recreational sailing was beginning to spread, other new yachts came down to the sea from the Genoese airports. In Voltri the young Ugo Costaguta founded the homonymous shipyard in 1897, in Varazze the Baglietto shipyard had already been operating for about ten years. These were two of the many Ligurian shipyards of the time, the most important in the field of sailing both cruising and regattas ..

Costaguta had the Duke of Abruzzi among its first supporters, famous explorer and passionate sailor who entrusted the young builder from Volterra, his boats for maintenance work and commissioned him to build "Nella", "Artica" and "Leda" . These boats were important racing yachts, winners of many prestigious prizes, including the French Cup in 1902, the most famous regatta of those times in the Mediterranean. Ugo Costaguta died in 1903 but the shipyard continued its activity until World War II with his brother Attilio, building splendid boats always at the top of the regattas all over the world.

The Baglietto di Varazze shipyard, also constituted a relevant presence in the sailing world, very fast boats were produced from its ports, always coming in first place in the rankings of the regattas for decades. Baglietto also built excellent speedboats and cruisers, production still in full swing.

At the Baglietto di Varazze shipyards Francesco Giovannelli, a famous sailor in the first half of the twentieth century built his boats. Giovannelli was also a self-taught designer of his boats that won many prizes and participated in the Olympics.

Some boats from these two important Ligurian shipyards still continue to sail making appearances at the gatherings of vintage boats.

From 1879 the Italian Yacht Club founded in Genoa was founded by a group of passionate Genoese cruise ship owners. This was the first Mediterranean Yacht Club still active in world sailing.

But sailing was not only made of large yachts, since the late nineteenth century, many small boats were built which could be easily used from Ligurian beaches and thanks to their low cost, they spread easily on our shores. The regattas organized for these small yachts multiplied along our coasts; every Sunday during the good season, in the villages of Liguria came the tugboat Cornigliano, bringing all the participants in the regatta coming from other places. A popular tradition and a service that lasted along the Genoese coast for over 50 years.

In the thirties the splendid yachts of classes 6 and 8 metres spread all over the world, even the Baglietto and Costaguta yards built many and very fast. The best known was "Italy" made in Voltri by Costaguta which won the gold medal in the waters of Kiel at the 1936 Berlin Olympics with a crew entirely made up of Genovese.

The Second World War stopped sailing activity once again which then started up again at the end of the forties.

There are still many regattas of small yachts organized by the many clubs of Liguria that found the enthusiasm and the desire to go by sea again. Even the great regattas resumed with the magnificent prewar yachts and new hulls built by our shipyards.

In Genova international regattas were once again organized at the Lido d'Albaro; the adventure was beginning again

New young sailors and talented sailors appeared on the scene; among the many we remember Giuseppe Canessa from Bogliasco, a very good helmsman on small boats, then a multi-town winner on the great yachts and Mario Capio di Nervi, undisputed champion for many years, winner of 2 world titles.

Sailing was changing, new technologies and new materials changed the boats and the technique with which they were conducted. The great Genoese and Ligurian tradition, however, continued to weigh, determining excellent results on the regatta fields all over the world.

The history of Ligurian sailing still remains a precious heritage that constitutes a precious cultural baggage at the base of the skill of today's sailors who continue to achieve gratifying results; there are still many things to say about modern sailing, but that's another story. 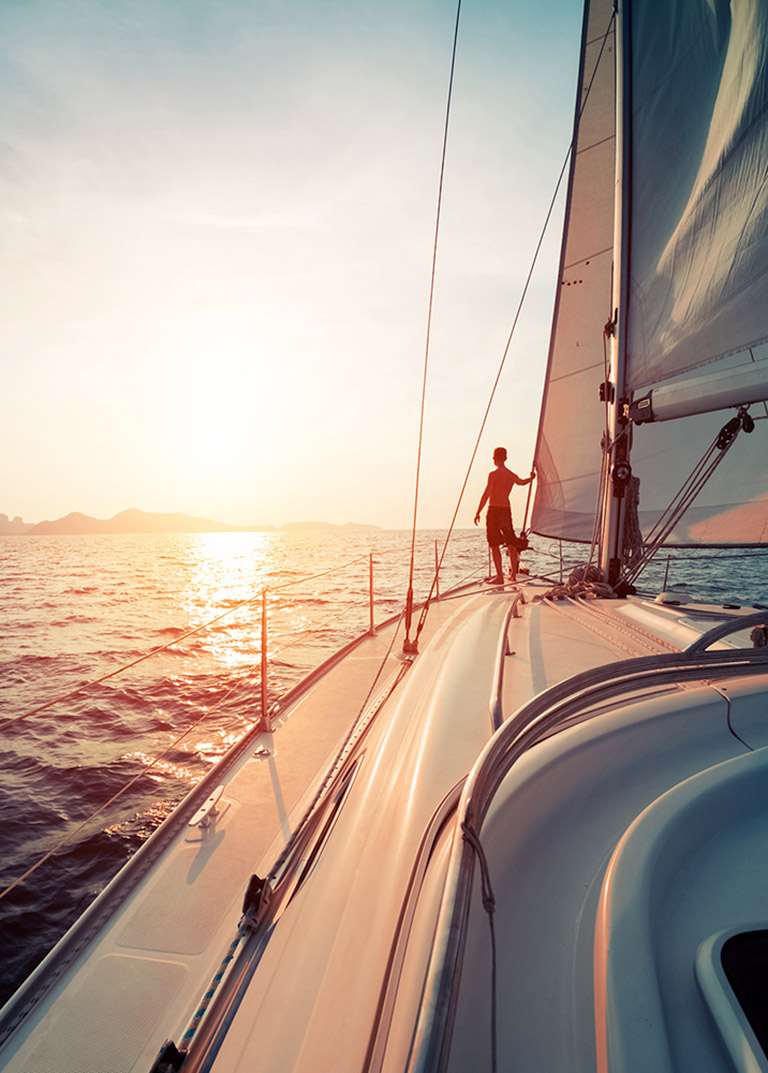